Liturgy of the Hours for September 23

About Today for Friday in the 25th week of Ordinary Time

This is the Liturgy of the Hours for September 23. Your local date is .

Like the Apostle Paul, Padre Pio da Pietrelcina placed at the center of his life and apostolic work the Cross of his Lord as his strength, his wisdom and his glory. Inflamed by love of Jesus Christ, he became like him in the sacrifice of himself for the salvation of the world.

This worthy follower of Saint Francis of Assisi was born on 25 May 1887 at Pietrelcina in the Archdiocese of Benevento, the son of Grazio Forgione and Maria Giuseppa De Nunzio. He was baptized the next day and given the name Francesco. At the age of twelve he received the Sacrament of Confirmation and made his First Holy Communion. On 6 January 1903, at the age of sixteen, he entered the novitiate of the Capuchin Friars at Morcone, where on 22 January he took the Franciscan habit and the name Brother Pio. At the end of his novitiate year he took simple vows, and on 27 January 1907 made his solemn profession. Filled with love of God and love of neighbor, Padre Pio lived to the full his vocation to work for the redemption of man, in accordance with the special mission which marked his entire life and which he exercised through the spiritual direction of the faithful: the sacramental reconciliation of penitents and the celebration of the Eucharist.

For Padre Pio, faith was life: he willed everything and did everything in the light of faith. He was assiduously devoted to prayer. He passed the day and a large part of the night in conversation with God. He would say: “In books we seek God, in prayer we find him. Prayer is the key which opens God’s heart”. Faith led him always to accept God’s mysterious will.[1] 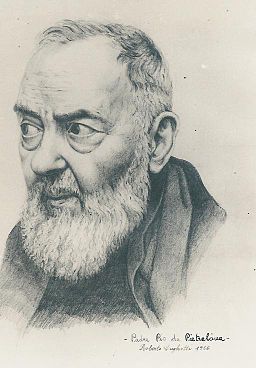 Liturgy of the Hours for September 23

Friday in the 25th week of Ordinary Time

For souls of many, dear Lord, that Your Name may be glorified across the world. For my children -- those aborted and those alive -- that they would seek the Lord with all their hearts. For young people, that they will find solace in worshipping the Lord and leaving behind the world and its allures.

We Pray for All Priest, God guide them and give them strength-Through Jesus Christ our Lord. Amen

Prayers for return to active practice of the faith for all my family members who are away from the Church. Prayers For health for all family and myself. Prayers for a neighbor with a diagnosis of cancer.

I am very sorry Dear God that on reviewing my prayer life, I discover that I have not praised you and thanked you enough. Andrew Wommack says, “Praise isn’t like the caboose that just follows what happens, but it’s more like the engine of a train that makes things happen.” Remind me always, Jesus.

O, Mother Mary please intercede for us in all our needs in this valley of tears! St.Agatha, Virgin & Martyr pray for us! Amen

Please pray that I will find work and become self-sufficient. Please pray healing for the Wallen family. Please pray for me as I am discerning a call to the Secular Carmelites. Lord hear our prayer.

Please pray for my dad, Raymond. We are learning now that his only functioning organ is his liver & are still in diagnostic stage. He is very ill and is likely dying, but if it is God's will, I pray that the doctors find his clear path back to good health. Please pray for healing, peace, salvation.

Please pray for my friend Gloria. She is in hospital emergency right now in great head pain, more serious than any headache she's ever experienced.

For my cousin Ray who went to meet the Lord. May the Lord Jesus have mercy on his soul.

Let us join our Blessed Mother, all the Angels, all the Saints, in begging God to release the poor souls in purgatory, specially those our loved ones & friends, priests and religious, those who have no one to pray for them, & those who have stayed there the longest. Jesus, have mercy on them please

In thanksgiving for a wonderful Women's Morning of Spirituality in the Diocese of Memphis, for the excellent witness speakers, Bishop Emeritus J.Terry Steib and the concelebrating diocesan priests (esp. Fr.Francis Chiawa),and deacons who took time from their busy schedules to be present for us.Pax!