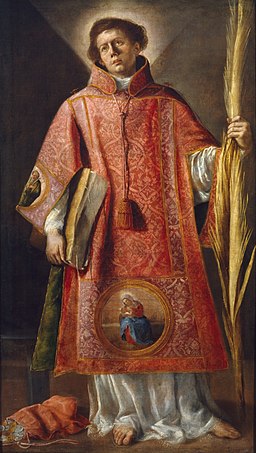 St. Lawrence was a deacon in the 3rd century. He suffered martyrdom during Emperor Valerian’s persecution, shortly after Pope Saint Sixtus II and Companions were killed. St. Ambrose of Milan wrote about St. Lawrence and said when the prefect of Rome demanded the Church’s treasures, St. Lawrence brought forth the poor, widowed, maimed and lepers. He declared these people greater than any treasure the emperor could possess. Constantine the Great built an oratory over his burial site which has been enlarged and beautified by successive rulers. It remains today as the basilica of San Lorenzo. [1][2]