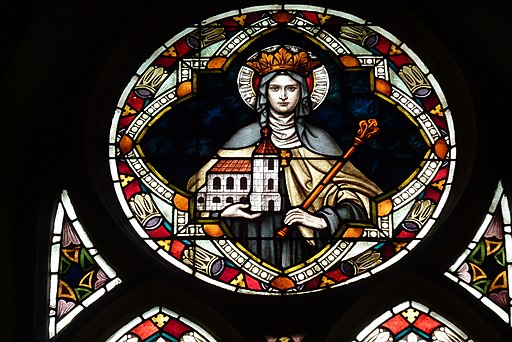 Saint Hedwig was duchess of Silesia, born about 1174, at Castle Andechs, Bavaria.

She was the daughter of Berthold IV, Duke of Merania and his wife, Agnes of Rochlitz. She received her education at the Benedictine convent of Lutzingen in Franconia, where her sister was abbess. At age 12, she married Henry I the Bearded of Silesia. Soon St Hedwig became actively involved in the administration of her husband’s land, used her influence to the construction of new monastic foundations, and assisted those existent in Silesia.

In years to come, the following monasteries were established: the Cistercian monastery of Leubus and of Heinrichau, the Premonstratensian monastery of St. Vincent, the priory of the Augustinian Canons at Kamenz and Bober. She also brought the Dominican and Franciscan orders to Silesia. Henry also founded the Hospital of the Holy Ghost at Breslau and the convent of the Cistercian nuns at Trebnitz. Hedwig and Henry had seven children and after the birth of her last child, they decided to take a vow of chastity before the Bishop of Breslau. Henry died in 1238 and Hedwig made the Abbey of Trebnitz her permanent home.

She continued to devote herself to God and to the work of charity and she was regarded as a saint even then. She died at Trebnitz, 12 or 15 October, 1243, and was canonized by Pope Clement IV in 1267. In her honor Frederick the Great built in 1773 St. Hedwig’s Cathedral in Berlin. She is the patron saint of Silesia, Poland and orphaned children.

Prayer for the Feast of Saint Hedwig

O God,
Who didst teach blessed Hedwig
to renounce the pomps of this world,
that, with her whole heart,
she might follow the humble way of Thy cross:
grant that, through her merits and example,
we may learn to trample under foot the perishable delights
of this world and by cleaving to Thy cross
overcome whatsoever may be opposed to us.
Who livest and reignest with Thee,
in the unity of the Holy Ghost, world without end.
Amen.[1]

Saint Margaret Mary Alacoque was born in 1647 in L’Hautecour, Burgundy, France, the only daughter of Claude and Philiberte Lamyn Alacoque, who had also several sons. From early childhood, Margaret was described as showing intense love for the Blessed Sacrament, and as preferring silence and prayer to childhood play.

After her First Communion at the age of nine, she practised in secret severe corporal mortification, until rheumatic fever confined her to bed for four years. At the end of this period, having made a vow to the Blessed Virgin to consecrate herself to religious life, it is said she was instantly restored to perfect health.

One night, after returning home from a ball for Carnival dressed in her finery, she experienced a vision of Christ, scourged and bloody. He reproached her for her forgetfulness of Him; yet He also reassured her by demonstrating that His Heart was filled with love for her, because of the childhood promise she had made to His Blessed Mother. As a result, she determined to fulfill her vow and entered, when almost 24 years of age, the Visitation Convent at Paray-le-Monial on 25 May 1671, intending to become a nun.

Saint Margaret was subjected to many trials to prove the genuineness of her vocation. Finally, she was admitted to profession on 6 November 1672. In this monastery, Saint Margaret received several private revelations of the Sacred Heart, the first on 27 December 1673 and the final one 18 months later. The visions revealed to her the form of the devotion, the chief features being reception of Holy Communion on the first Friday of each month, Eucharistic adoration during a “Holy hour” on Thursdays, and the celebration of the Feast of the Sacred Heart. She stated that in her vision she was instructed to spend an hour every Thursday night to meditate on Jesus’ Agony in the Garden of Gethsemane. The Holy Hour practice later became widespread among the Catholic Church.

Initially discouraged in her efforts to follow the instruction she had received in her visions, she was eventually able to convince her superior, Mother de Saumaise, of the authenticity of her visions. She was unable, however, to convince a group of theologians of the validity of her apparitions, nor was she any more successful with many of the members of her own community, and suffered greatly at their hands. She eventually received the support of St. Claude de la Colombière, S.J., the community’s confessor for a time, who declared that the visions were genuine. In 1683, opposition in the community ended when Mother Melin was elected Superior and named Margaret Mary her assistant. She later became Novice Mistress, and saw the monastery observe the Feast of the Sacred Heart privately, beginning in 1686. Two years later, a chapel was built at Paray-le-Monial to honor the Sacred Heart. Margaret Mary Alacoque died on 17 October 1690. She was canonized on 13 May 1920 by Pope Benedict XV. She is the patron saint of those suffering with polio, devotees of the Sacred Heart, loss of parents.[2]

[1] Prayer source: Collect for the Holy Sacrifice of the Mass.
Image source: Public domain.
[2] Text source: en.wikipedia.org
Note: Optional Memorials and Commemorations are optional celebrations and, at present, we do not include content specific to these special days. This “About Today” is provided so that you can celebrate this Saint as you worship Christ.

Liturgy of the Hours for December 06